Birds eyes come in an wonderful assortment of colours. We see these colours as a result of pigments in the iris and the way light is reflected back to us. Birds that hunt at night generally have dark eyes, probably so that they are not seen by their prey. Some birds’ eyes change colour as they get older and some birds change the colour of their eyes to attract mates. 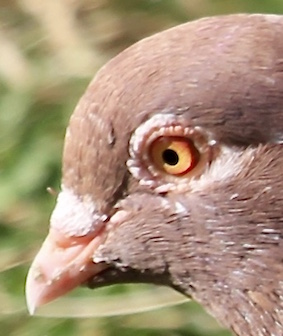 The ring around their eyes, called an ‘eye ring’ or ‘orbital ring’,  may be coloured to make their eyes more noticable. Tauhou (wax eyes / silver eyes) are a perfect example. Their silvery white eye ring gives them their English name. 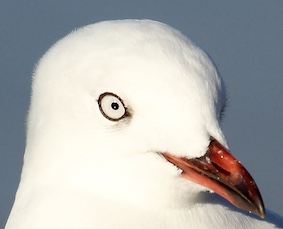 Birds eyes are similar to reptile eyes and have a flatter shape, oval rather than round.  Different birds have differently shaped eyes.

Birds can quickly change the shape of their lens using ciliary muscles. This gives them the ability to keep things in focus as they fly towards it. They have two lens systems.

Even the shape of a bird’s lens varies. Some, for example parrots like the kea, are flat in the front (anterior) and curving out (convex) at the back (posterior). Some, like ruru and mallard, are convex on both sides. Scientists have yet to understand the reasons for this.

Birds’ retina (the area which receives light) are quite different from ours. It contains three types of photoreceptors. Night birds have only the first (rods).

Birds eyes are much larger in relation to their head size than are human eyes. Our eyes are about 1% of our head size while taringi (starling) eyes are 15% of theirs. This shows how important sight is to birds. Birds which are nocturnal (active at night) have proportionally larger eyes.

Kiwi are nocturnal  birds but their eyes have developed differently. They don’t need good eyesight because they use their keen sense of smell instead. They are the world’s only bird with its nostrils (nose opening) at the end of its beak. In comparison to other birds kiwi have small eyes and only a very small part of their brain is dedicated to sight. Their field of vision is so small that they cannot see the end of their bills, happily their nose is right there to pass information to their brain.

Birds  can see very small things from a great distance. The position and angle of their eyes on their heads  affects how they see the world. A large part of their brain is dedicated to sight. They see more images per second than humans do. We ‘see’ between 10 and 15 images a second while birds can ‘see’ over 160 images a second. This gives them a greater ability to detect movement. They can see the movement of the sun and moon in the sky, something we cannot do. Birds that migrate over long distances may find this useful for setting their course and getting to their destination without getting lost.

Birds may also be able to ‘see’ magnetic fields. Birds which migrate have photoreceptive proteins called cyptochromes in their right eye. Light hits these and causes a reaction which gives the bird useful information about the earth’s magnetic fields. Humans are quite unable to detect magnetic fields using only their five senses.

Monocular Vision. Only one eye can focus on an object at one time. Most birds have eyes at the side of narrow heads and see different things through each eye. Each eye can see more around it (called wider field of vision).

Binocular Vision. Eyes which can focus together onto one object. Like humans owls have eyes at the front of their heads. They cannot move their eyeballs and can only see what’s in front of them. They need to move their heads to see things at the side or behind them. Some birds (birds of prey are one example)  have wider heads with side positioned eyes but forward facing. They have smaller fields of vision but are able to pinpoint an object and work out its position. 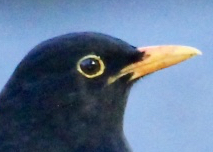 Birds can see things that we can’t.

Birds have three eyelids: an upper eyelid, a lower eyelid and a thin, see-through, nictitating membrane, which keeps the eye clean and protected. When a bird blinks the lower eyelid can cover more of the eye that the upper one. Humans can only move their upper eyelid.