With over 30 shag species worldwide 12 are found in New Zealand,  eight species  are endemic and four other species, including the pied shag, which are native. Sometimes a shag is called a cormorant. During the breeding season these birds grow shaggy crest feathers and this may be how they got their name.

Shags are grouped according to the colour of their feet – black, yellow or pink.

Kāruhiruhi can live up to 20 years. They are big birds with a black back and white front, a grey bill, with pink markings below, a yellow patch in front of green eyes and a blue eye ring. They have black feet. Their nests, built with sticks, twigs and lined with seaweed or fine grasses, are often found in pōhutukawa trees on a cliff edge high above the sea and are reused year after year. They lay between 2 and 5 blue-green eggs twice a year.

It dives after small fish and can stay underwater for several minutes. It also eats small crayfish, eels and frogs.I have watched a shag swallow a flounder. The shape of this flat fish makes it hard to fit down its throat. The shag slapped the fish against a rock and the surface of the water many times until somehow it managed to swallow it. It was a noisy lunch.

Shags fly with their neck stretched while when herons fly their necks are curved in an s shape. Unlike some other seabirds kāruhiruhi don’t have really waterproof feathers. After chasing fish they must dry their wings. You may see them perched above the water or on a rock with their wings spread like washing on a line. 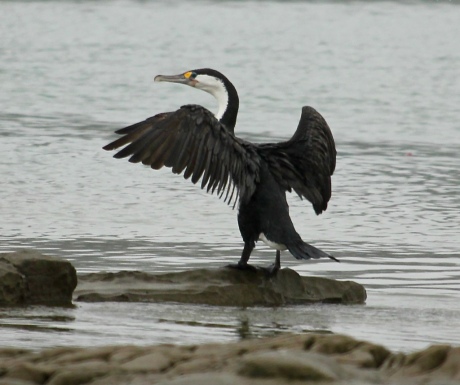