There were many attempts to introduce game birds into New Zealand starting as early as 1867. In the decade before World War 2 fertilised duck eggs were imported from San Fransisco. They were carried in wicker baskets and brought by flying boat planes.  This attempt together with captive breeding programs ensured that  mallard duck numbers spread rapidly. This species has thrived because farmers created an ideal habitat when they drained wetlands to create open pasture.

Female and male ducks have different colourings. The male, called a drake, has a glossy green head and white collar around its neck. The female is a mottled brown with a brown bill and very like the endemic grey duck. Both sexes have orange feet and a purple-blue speculum with both sides outlined in white. These ducks prefer wetlands and ponds, lakes and flooded fields. They are a medium-to-large bird often seen in urban ponds and parks. They can lay more than 10 eggs in a clutch and can rear 2 clutches in a season. Some birds have a darker plumage with some white areas on their neck and chests. In the photo you can see a dark duckling amongst its yellow and brown siblings.

Unfortunately the mallard duck can breed with the endemic grey duck and this is a threat to the continuation of this native specie. It can be hard to distinguish between grey ducks, female mallards and cross species birds. DNA testing suggests that there may be no pure grey duck populations remaining in NZ. It is not only the grey duck which is being threatened. In other parts of the world mallards are having the same impact on similar native or endemic ducks.

Mallards are popular game birds but is seems that some birds have learnt to stay close to city parks during the duck shooting season. Many conservationists regard mallards as a pest species both in New Zealand and in other parts of the world. 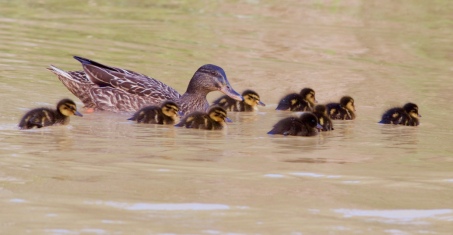