At this time of year a lot of birds have teenagers demanding attention. Their chicks have grown and are practically as big as them. They have sprouted sturdy flight feathers. They look more like their parents although, depending on the species, adult plumage may take longer to develop. Nonetheless they still need to be shown the ropes and fed. It’s tiring for Mr and Mrs Bird.

Others are minding their second or third clutch of eggs. Life can be very fast and short. For some species reproduction is an imperative. Some may get a surprise when their eggs hatch. Without their agreement they have become foster parents. Their new hatchlings look different. Do they realize they are caring for another species? If they do it makes no difference. They pull out all stops to ensure ‘their baby’ survives to independence. When I see a tiny riroriro (greywarbler) feeding its much larger pīpīwharauroa (shining bronze cuckoo) fledgling I am amazed at their dedication and perserverance. 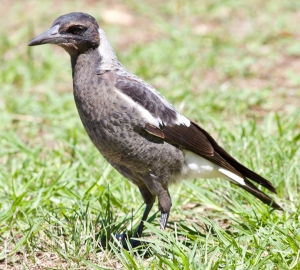 I observed a young Australian magpie foraging in the leaf litter. Its parents watched from a distance. It did not yet have adult colours. This intelligent teenager was clearly curious, interested to learn about the world. It decided to inspect me close-up. Maybe it has already learnt that some humans are a source of free food. 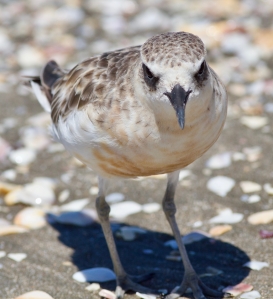 I also observed a NZ dotterel (tūturiwhatu), which approached me with steely determination, his eyes fixed on mine. I realised that it was challenging me to turn back. I felt as if we were communicating or at least that the tūturiwhatu was making a statement I understood.

While the early bird may catch the worm, the distracted bird gets caught by Master Cat, who has also been practicing his hunting and stalking skills. The sound of raucous teenagers demanding food from their harassed parents makes it easy for us to spot them. It also alerts the local predators. Most small birds flit through the leaves chasing insects and perhaps also to avoid being caught. Getting a good clear photo can be challenging.

Some species may leave their offspring on their own or in nurseries watched over by a few adult birds. Their parents return with food and are greeted with enthusiastic demands. Lastly some birds are rejecting their young, refusing to feed them thus forcing their teenagers to scavenge and hunt on their own.

Avian parenting is not that different after all.

The photos show a red-billed gull (tarāpunga) feeding its teenager. 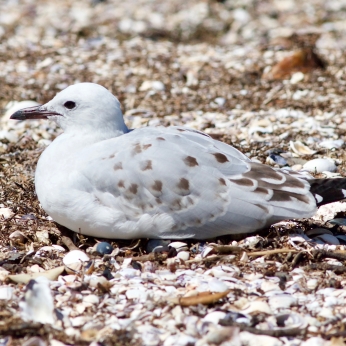